If you’re a cord cutter living in a densely populated area, you might be lucky enough to access channels from multiple Over-the-Air TV markets. With the right antenna setup, coverage from multiple local OTA TV broadcast towers can dramatically increase the number of channels you can receive.

Those who live in between major cities like Baltimore and Washington, or between major urban and suburban areas like New York and New Jersey, or even along the Canada/US border can access overlapping OTA broadcast regions. 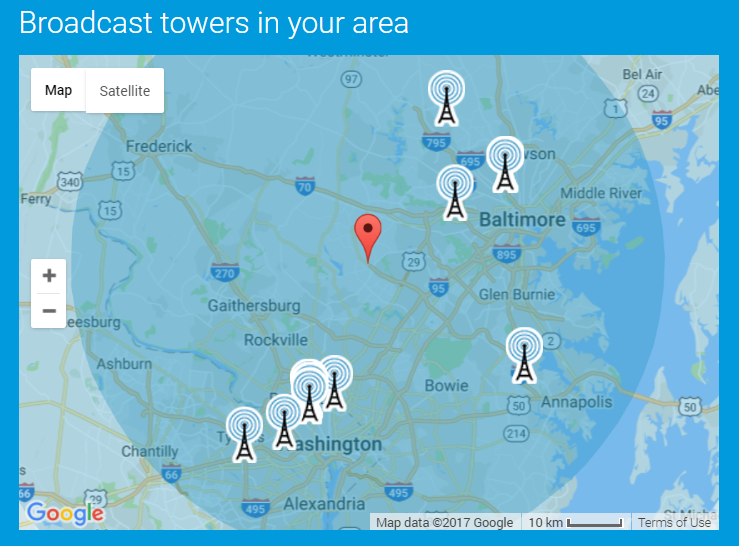 However, depending on your home’s position in relation to those broadcast towers, you may need a different type of antenna or to combine two different antennas to tap into this OTA TV jackpot.

The Best Antenna Setup Options to Access Multiple OTA Markets
For most cord cutters, setting up an OTA antenna is as simple as placing it in a window or outside facing the direction of your local broadcast towers.

But when your local channels are broadcast from two disparate locations, this can pose more of a challenge, especially if you're trying to capture signals from towers located 35 miles or more away from you.

Luckily cord cutters have two great options that will help ensure they get the best possible signal from all of the in-range broadcast towers in their area.

Option 1 – Multi or Omni-Directional Antennas
If your local towers are less than 40 degrees apart, a standard multi-directional (or omni-directional) antenna should do the job.

Many ‘flat’ antennas and indoor table-top antennas include multi- or omni-directional technology. Some larger outdoor antennas are also multi-directional or have multiple ‘bays’ that can be pointed in opposite directions. 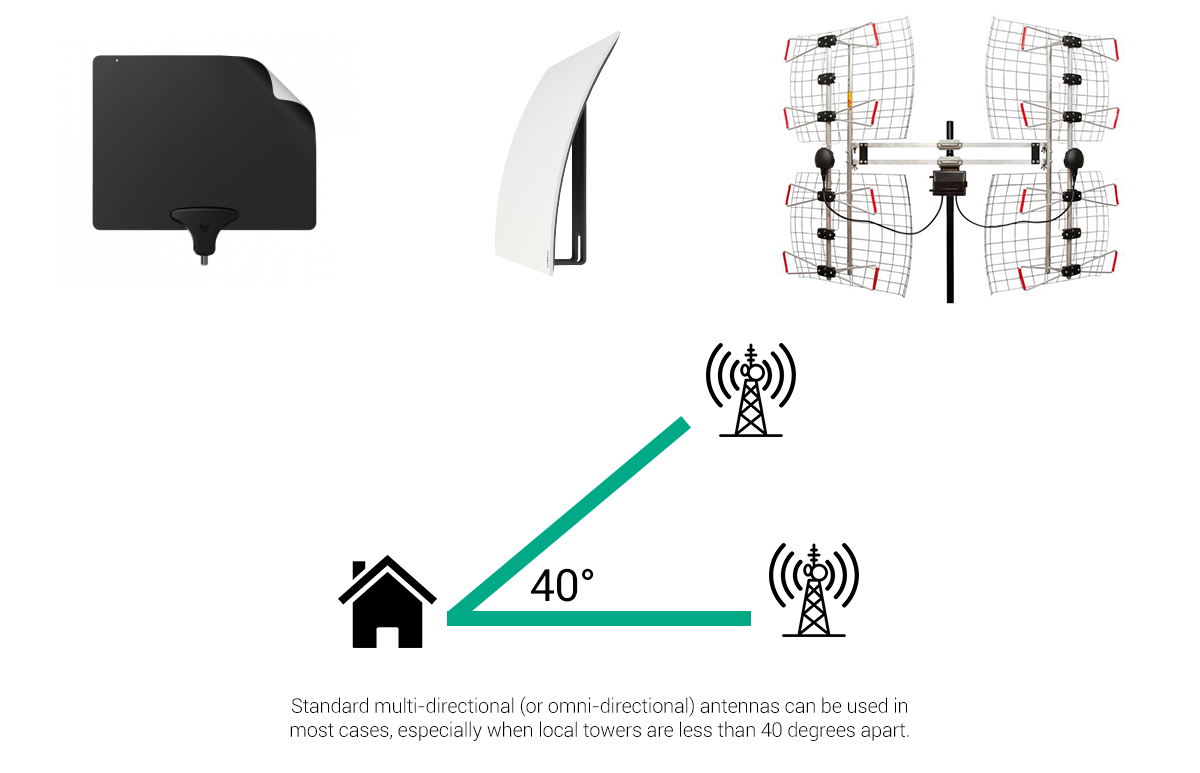 (Learn more about picking the right OTA antenna for your cord cutting needs on our OTA Antennas and Reception page.)

Option 2 – Two Uni-Directional Antennas and a Combiner
So what happens when towers located more than 40 degrees apart like they are in the border cities of Detroit, Michigan and Windsor, Ontario? 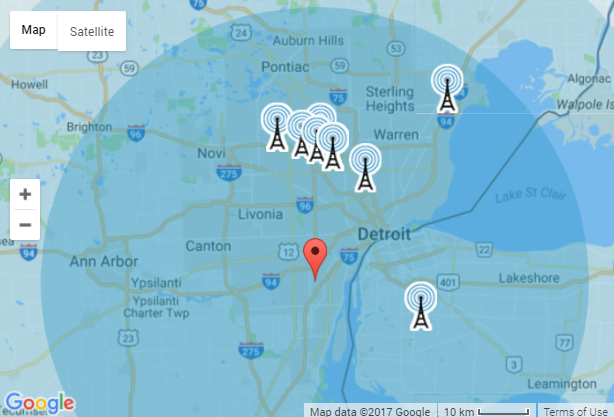 Detroit/Windsor’s local broadcast towers are well within reach of cord cutters in both the US and Canada (only 28 miles apart). That being said, the towers are positioned as much as 180 degrees apart in some instances.

But don’t worry, the right antenna setup makes it possible to get rock solid reception from both sides of the border at the same time!

In cases like this, the best option for cord cutters is to employ two uni-directional antennas: one antenna pointed at the Detroit towers, and the other at the Windsor towers across the river. 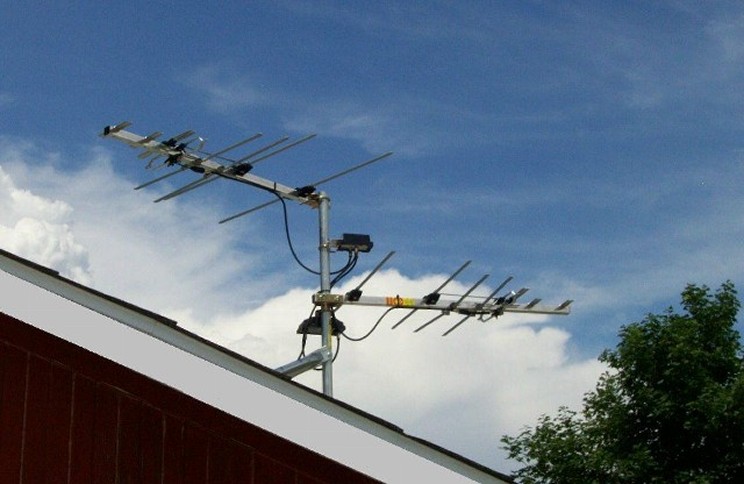 Then, you just need a 2-way OTA combiner to connect these two antennas to an OTA DVR like Tablo or to your TV, so you can easily watch channels from either set of towers. Combiners (which cost about $30) merge the two sets of signals into a single stream of TV.

Using a combiner is as easy as plugging the coax cables from the two antennas into the combiner device and then using a third coax cable from the combiner to connect to the Tablo OTA DVR or TV. Just make sure that the lengths of the two pieces of coaxial cable connecting the antennas to the combiner are of equal length to avoid multipath interference.

What to Avoid: Antenna Rotors (or Rotators)
Antenna rotors (or rotators) are devices that allow you to mechanically adjust an antenna’s direction, without needing to climb up on the roof. Those of you who watched OTA TV in your youth might remember a 'dial' sitting next to the TV set which was a rotor controller: 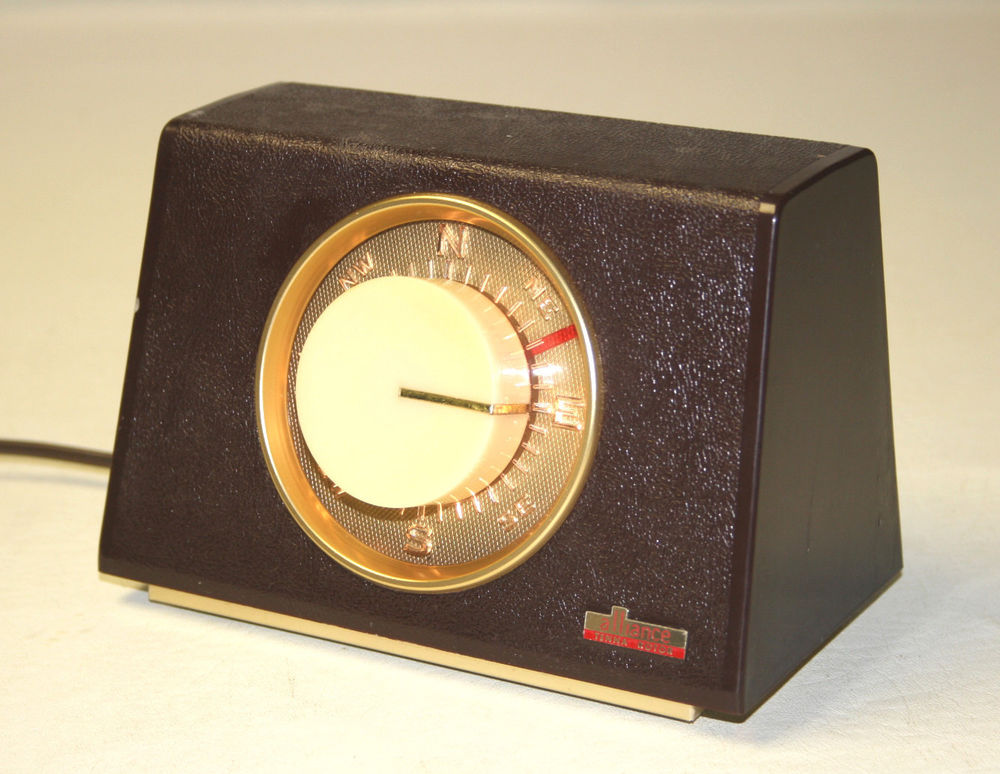 While today's rotors are more high-tech and might seem like a cheap way to get reception from two broadcast locations, it’s a non-starter when using a DVR, or even some digital TVs.

In order to complete scheduled recordings, OTA DVRs need to ‘see’ the signal for ALL of your local channels at ALL times. Some digital TVs also won’t allow you to maintain a list of all available channels from multiple channel scans.

Why is this a problem? Going back to our Detroit/Windsor example, let’s say you want to watch the end of a hockey game on Windsor’s CBC station, but you also don’t want to miss the start of Saturday Night Live on Detroit’s NBC affiliate. If your antenna is pointed at the CBC tower for the game, there’s no way for your DVR to ‘see’ the signal from NBC because your antenna is pointed away from the NBC tower.

Even when there isn’t a direct conflict, you would need to remember to use the rotor to point your antenna in the correct direction before the start of a recording. And let’s be honest, nobody’s got the time or interest in keeping track of things like that! Plus, being able to set recordings anytime (and anywhere) is one of the awesome things about DVR technology like Tablo, and you wouldn’t want to have to rush home to tweak your antenna!

So now that you know what setup option will work best, as well as what to avoid for your overlapping OTA TV market abode, go forth and enjoy the abundance of glorious free TV in HD!

And if you’re feeling generous with your newfound TV jackpot, share your story with us so that others in your area can reap the rewards for themselves!

Check out these tools and posts on Over-the-Air TV antennas, OTA signals, and reception next: