VHF vs. UHF – Why OTA Frequency Bands Matter for Cord Cutters with Antennas 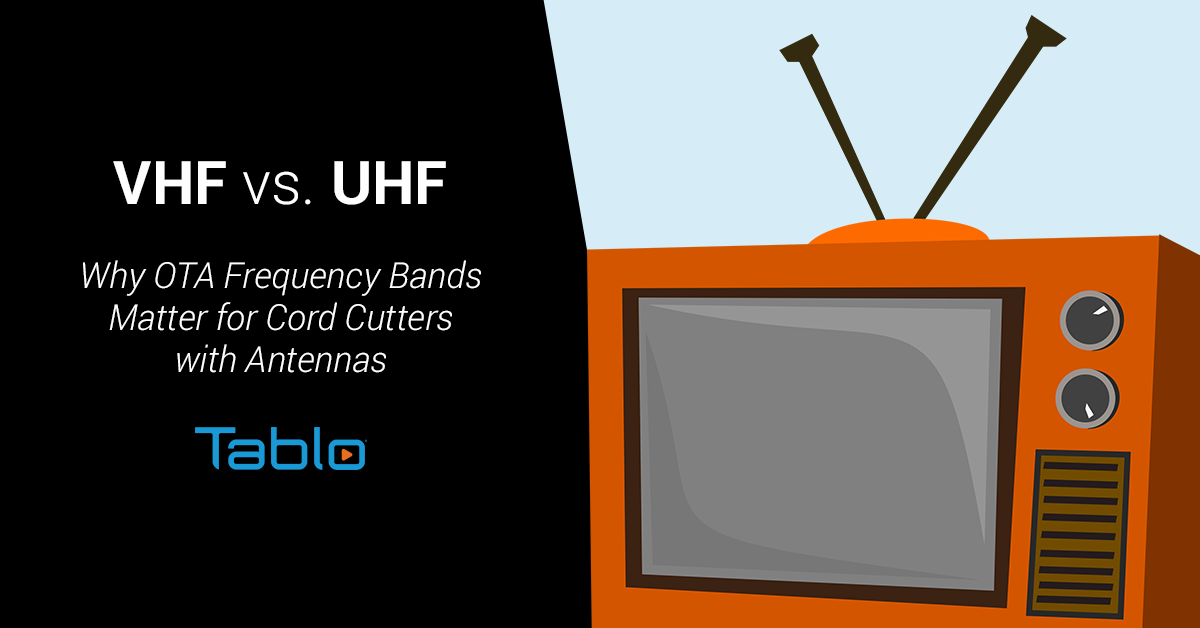 While most OTA TV antennas on the market are designed to capture both frequencies, some antennas – especially certain ‘flat’ indoor antennas – are optimized primarily to capture UHF channels.

If you’re having trouble receiving one or two channels even though you’re close to your local broadcast towers, it may be because your antenna is not designed to pick up VHF frequencies.

What are VHF and UHF TV Frequencies?
In the US and Canada, the VHF television band occupies frequencies between 54 and 216 MHz and the UHF band between 470 and 608 MHz.

However, the channel’s physical broadcast frequency is not always reflected by the channel number you see. 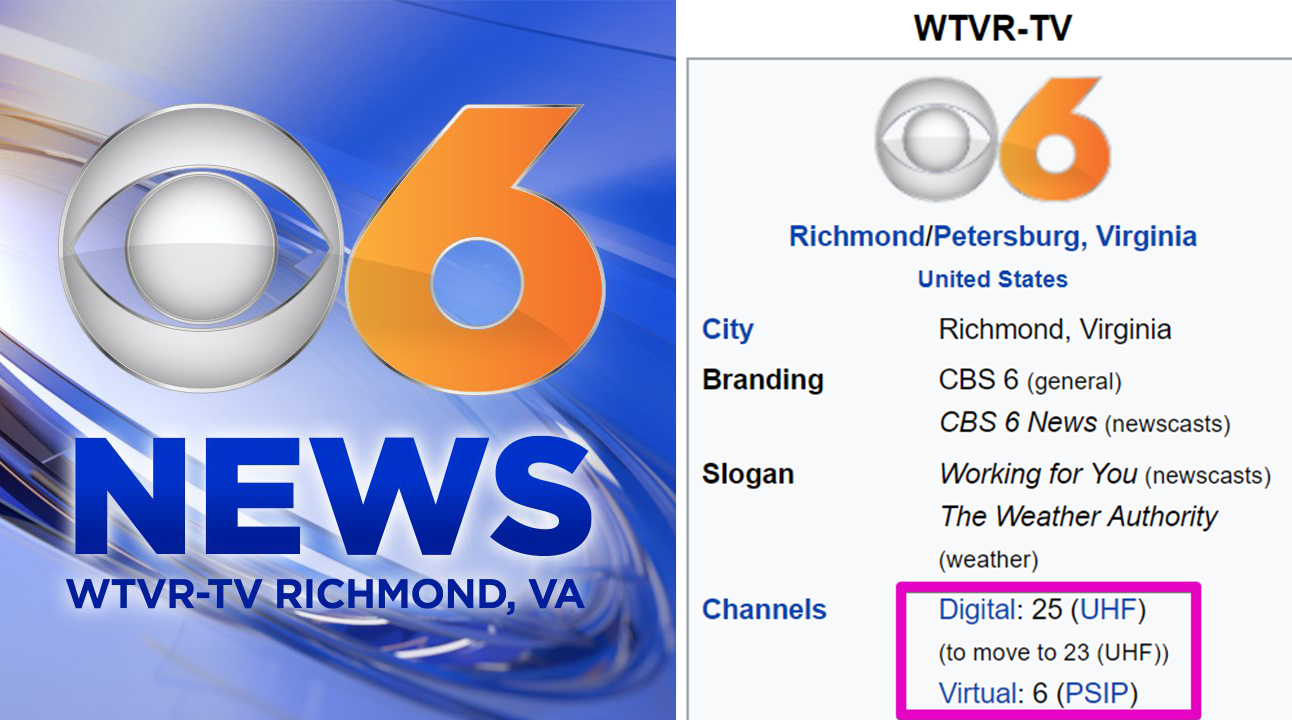 For example, channel 6 in Richmond, VA has a ‘virtual channel’ (i.e. channel number) of 6 on your TV or Tablo DVR, but is broadcast on a ‘transmit channel’ of 25.

While it is possible that stations broadcasting in the VHF band to have a ‘virtual channel’ number in the UHF channel range (14+), this is rare.

How Can I Tell If I Need a TV Antenna That Supports Both UHF & VHF?
As mentioned above, OTA TV channels between 2 and 13 are often broadcast on the VHF band so it’s best to start by reviewing your local channel lineup to find out which channels are broadcasting your favorite networks like ABC, CBS, FOX, NBC and the CW.

For example, in Dallas, viewers might believe they could miss out on popular networks like FOX (KDFW) and ABC (WFAA) when using a UHF-only TV antenna. 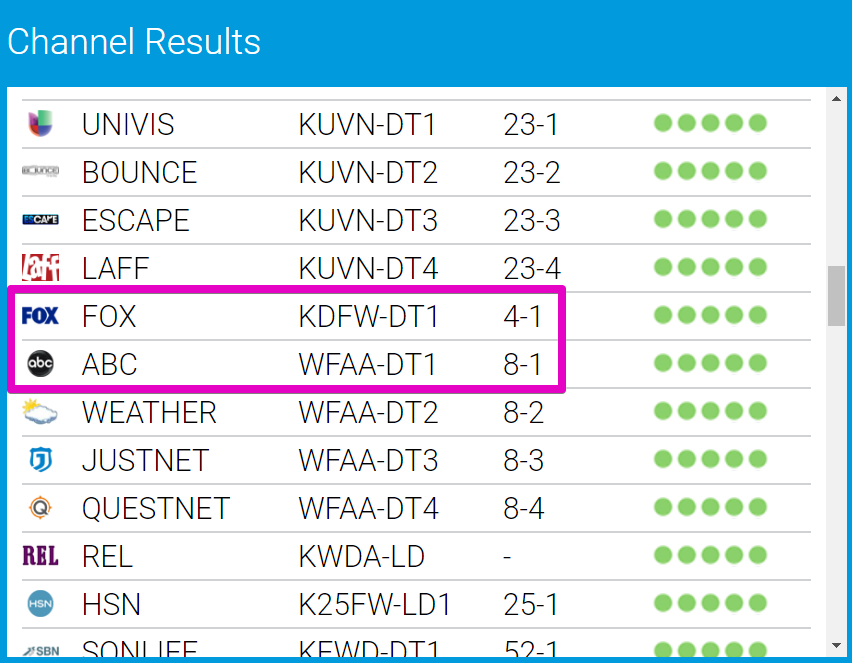 But just because a channel has a ‘virtual' or advertised channel number lower than 14, doesn’t necessarily mean it’s broadcast on a VHF frequency.

The best place to confirm the TV channel’s frequency is via the FCC’s website at: https://www.fcc.gov/media/television/tv-query

You can search for station information by city or by call sign.

As you can see, FOX affiliate KDFW’s ‘virtual’ channel is 4 but its ‘transmit’ channel is 35, so you won’t need a VHF-capable TV antenna to receive it.

However, ABC affiliate WFAA has both a virtual and transmit channel of 8 which is indeed on the VHF band.

OTA TV Antenna Shopping Tips
If you want to access TV channels available in both VHF and UHF frequencies in your area, inspect the features list on the packaging or online listing of the TV antennas you’re considering, to ensure they include support for both UHF and VHF bands.

Very few 'flat' indoor antennas like the one below do support VHF signals. 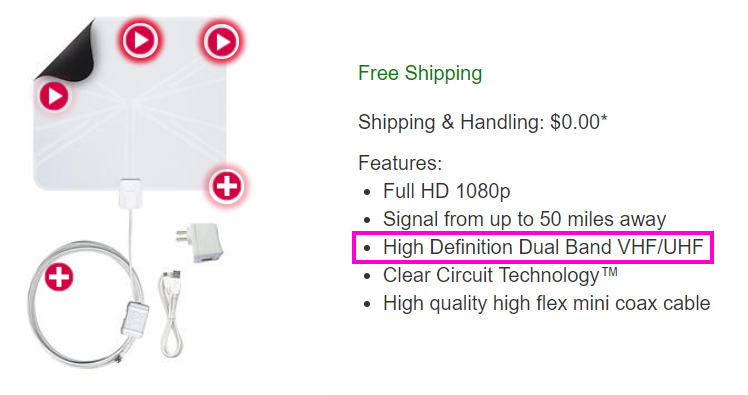 If there’s already a TV antenna mounted on your roof and you’re not sure what brand or style it is, antennas with VHF capability generally have long prongs and are quite large in size, whereas UHF-only antennas are slightly smaller and have shorter prongs or loops.

Most outdoor antennas will have both long and short prongs, or prongs and loops, and therefore will support both frequencies. However, cord cutters with channels in the VHF low spectrum (2-6) may need an even more specialized antenna with very long prongs to recieve those stations.

Check out these tools and posts on Over-the-Air TV antennas, OTA signals, and reception next: