Was your last experience with Over-the-Air antenna TV watching Leave It to Beaver or Bonanza on a tiny black and white screen set into a giant hunk of wood?

If so, you might be surprised by how much has changed with antenna TV! 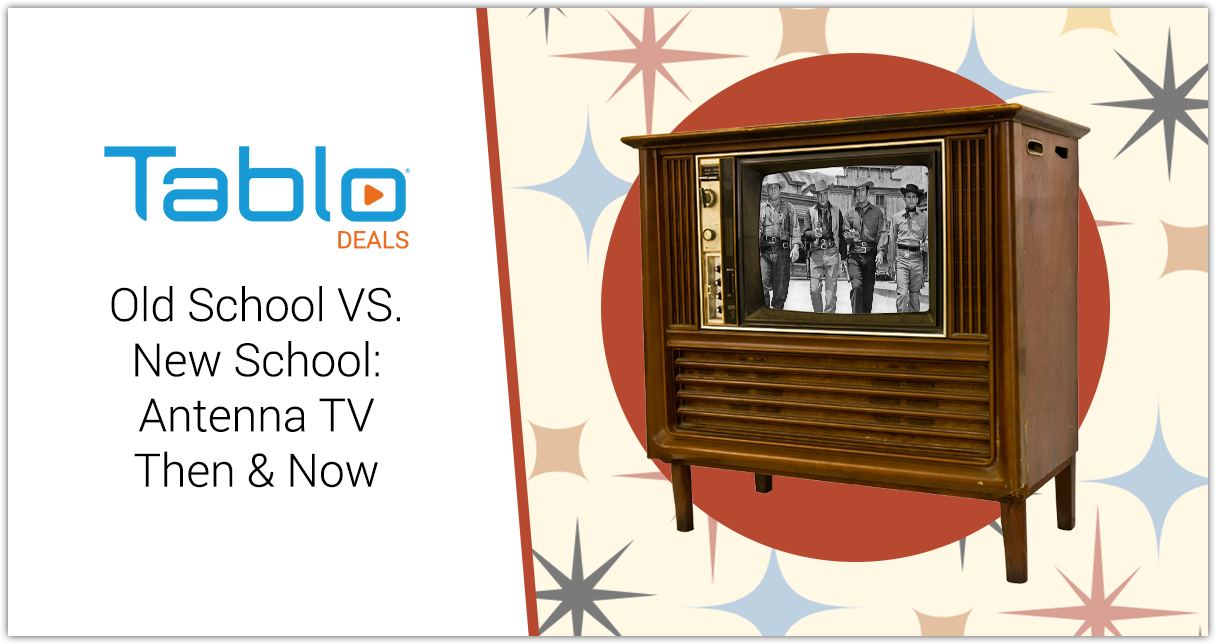 Keep reading for our top ‘then and now’ comparisons of free Over-the-Air television. 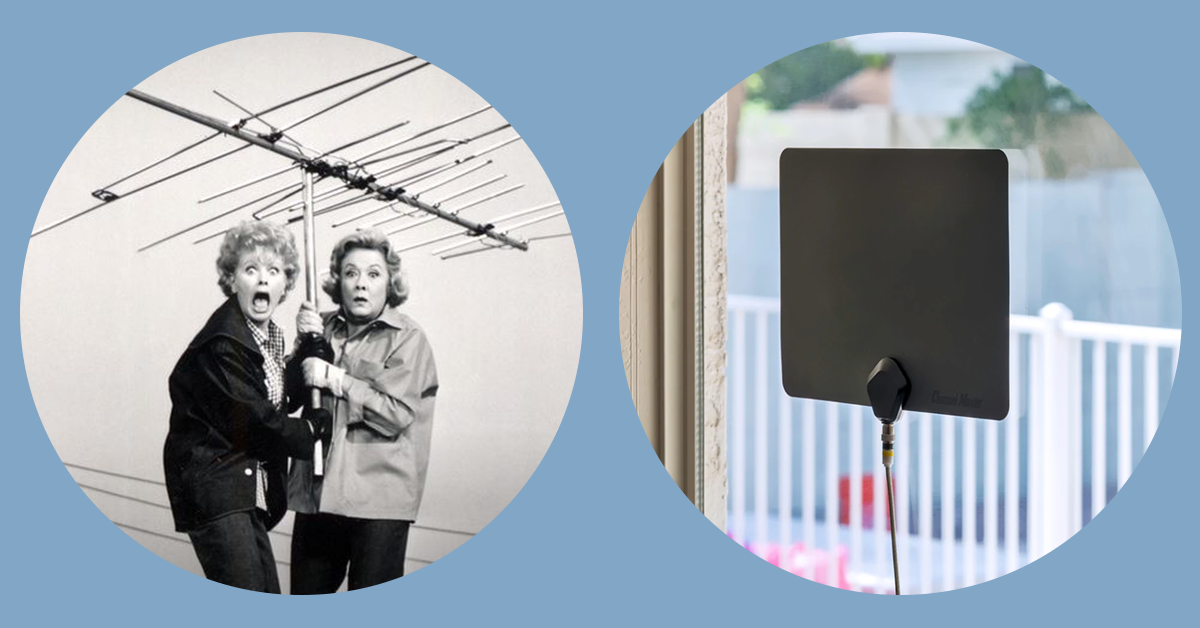 In the early days of antenna TV, channels were broadcast on the VHF (very high frequency) spectrum. While VHF broadcasts can be recieved from further away, they require a larger antenna element to pick up which is why most older TV antennas were either large pointy-looking rooftop models or telescoping ‘rabbit ears’.

Although those older-style antennas still work, most channels are now broadcast on the UHF spectrum which doesn’t reach quite as far but is easier to receive with smaller antenna elements, even through some obstructions like buildings. That’s why many cord cutters can use a smaller indoor TV antenna and still get great reception. 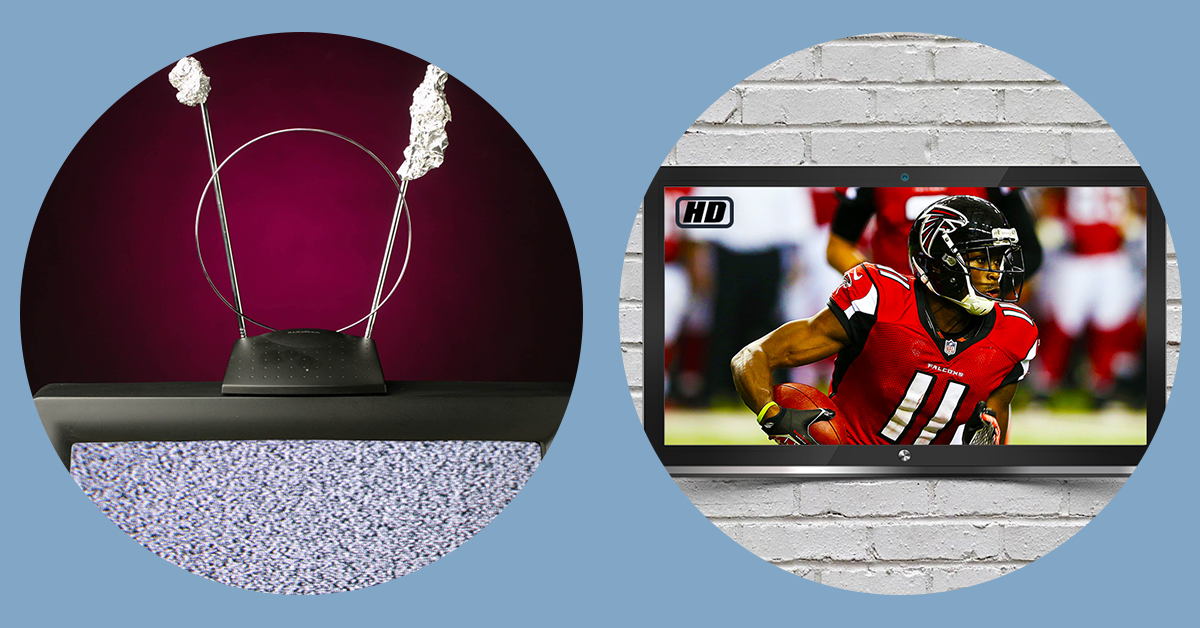 Back in the day, antenna TV was analog and if your reception wasn’t perfect even the largest ball of tinfoil applied to the antenna couldn’t prevent a snowy picture.

Today, that's a thing of the past as Over-the-Air television is now digital. All the major networks are broadcast in full HD quality so if your antenna is receiving the signal, the picture will come in crisp and clear. It’s only at the hairy edge of possible reception that viewers can potentially experience macro blocking, pixelation, or audio dropouts. Improving the position or power of your antenna can often resolve this. 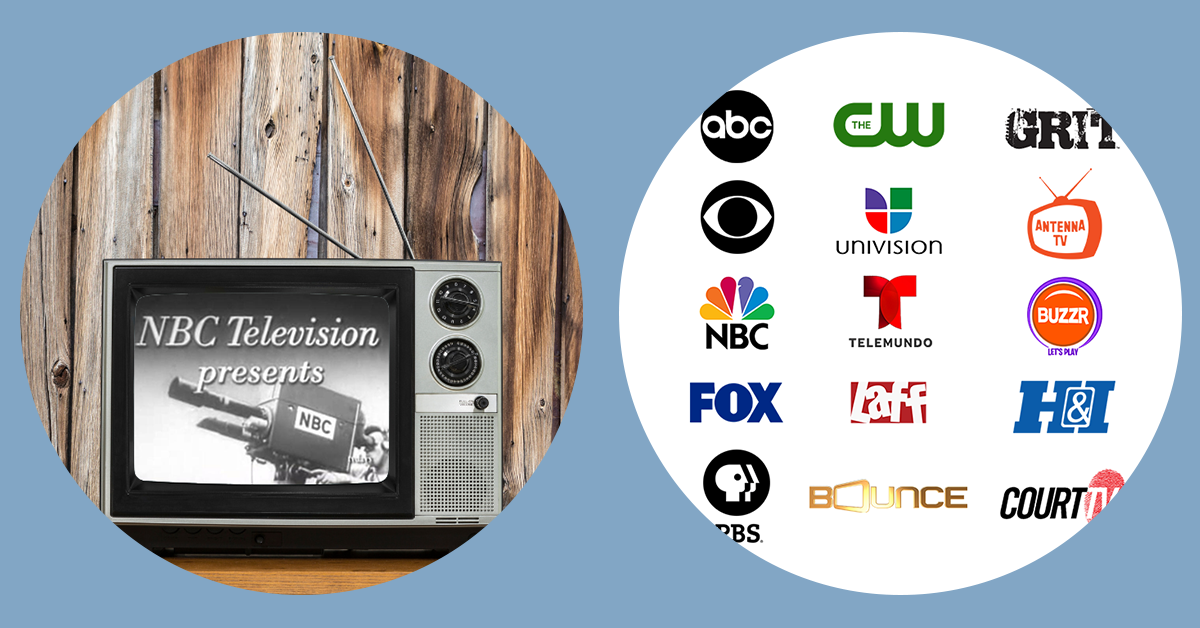 Once upon a time, you were lucky to get three channels with a TV antenna: ABC, CBS, and NBC.

Today you can expect to receive those three channels as well as FOX, the CW, PBS, and dozens of other specialty subchannels showcasing your favorite dramas and sitcoms from decades past, westerns, movies, vintage game shows, news, sports, and much more.

THEN: Gather Round the Television Set VS. NOW: Watch TV Anywhere 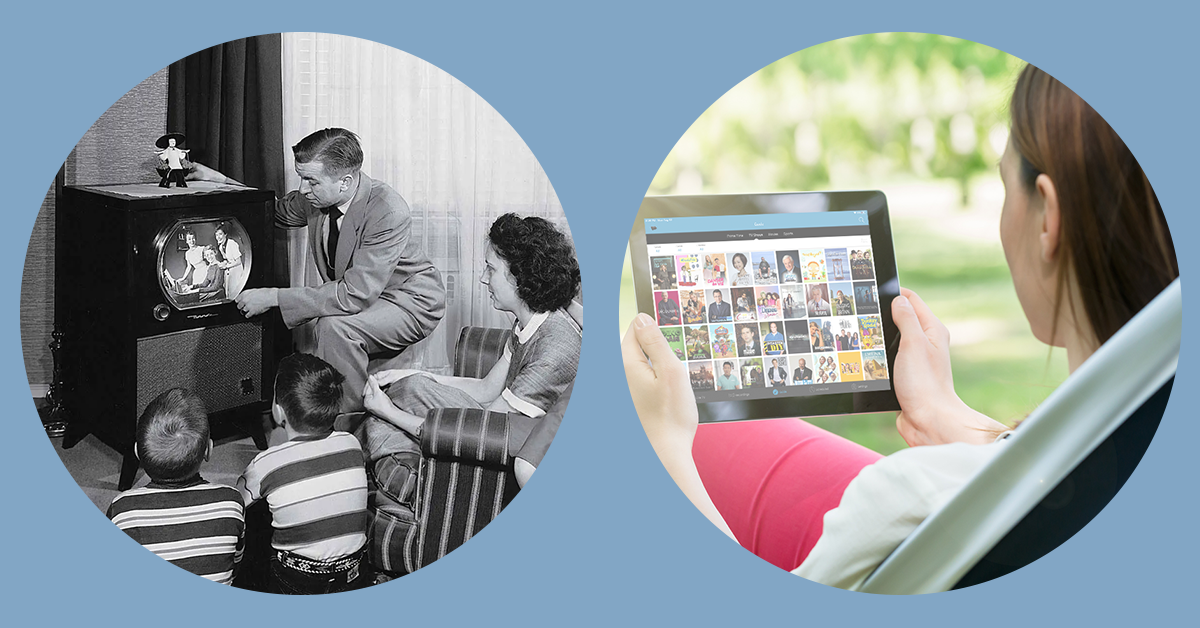 Once upon a time, folks were lucky to have a single television with a tiny screen built into a cabinet so heavy that moving it would require some serious muscle. Fights over what to watch and who got the best seat on the living room couch were common.

Today cord cutters can use distribution amplifiers or network-connected tuners to deliver broadcast signals from a single antenna to all the TVs in their home. Some tuners, like Tablo, will even send programs over your home network or the internet to smartphones, tablets, and computers so you can watch your show in bed, in the backyard, or in line at the DMV.

THEN: Watch When It’s On or Else VS. NOW: Watch On Your Schedule 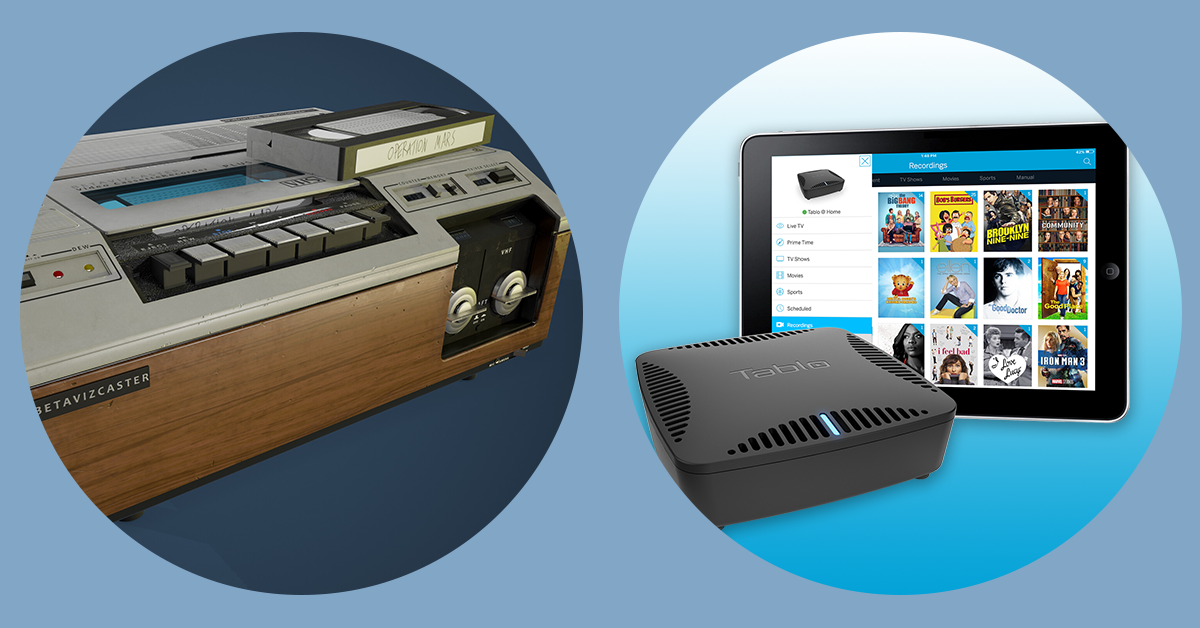 Until the VCR caught on in the late 70s, there was no way to see a program if you weren’t at home to enjoy it when it aired. Programming those VCRs wasn’t easy either. When Over-the-Air TV switched to digital, and consumers moved on to DVD and Blu-Ray players, that convenience evaporated again.

But today there are modern DVRs designed specifically for today’s antenna TV broadcasts with simple-to-use interfaces and the luxury of features like one-touch series recording. That way you can easily catch up on your show the next day, wait and binge an entire season, or watch your favorite episode again and again without the risk of wearing out the VCR tape. 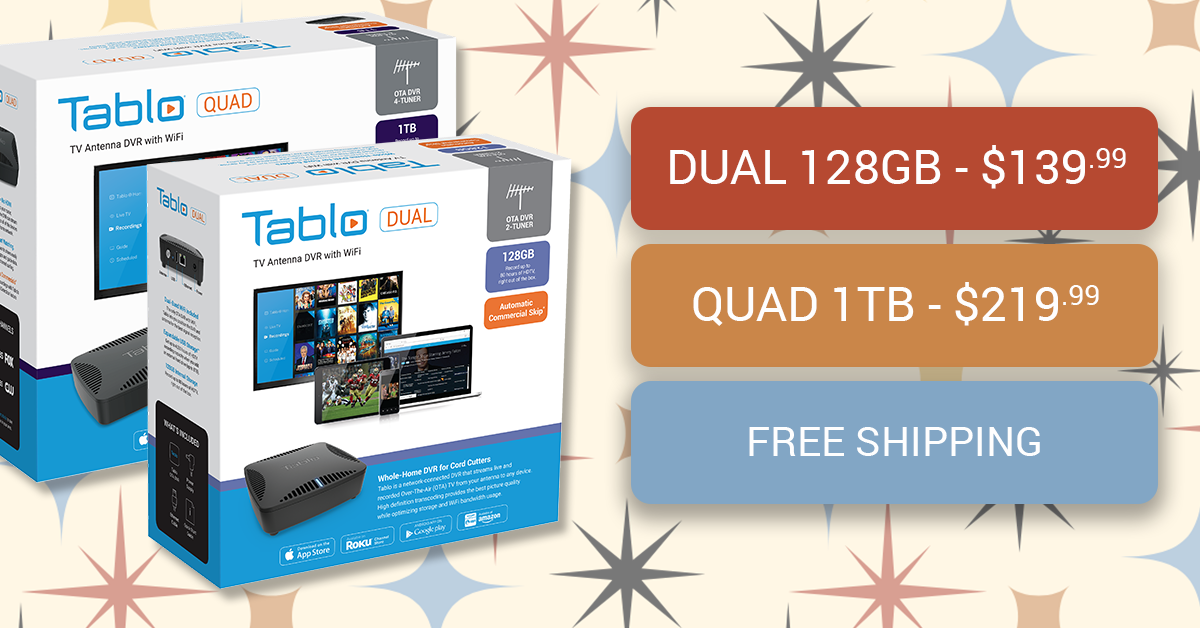 Thankfully cord cutters today can get a modern, storage-included, network-connected Tablo Over-the-Air DVR for less than the price of two months of cable.

For a limited time, that price tag is even less thanks to this sale which runs through August 10th:

The Tablo DUAL 128GB is a great option that lets you record and stream up to two antenna TV channels at once and record up to 80 hours of HDTV, right out of the box.

And the Tablo QUAD 1TB lets you catch all your favorite broadcast TV shows with four tuners, and enough storage on the included SATA hard drive to record and stream entire seasons worth of shows!

Plus, all Tablo OTA DVRs are covered by our 30-day money-back guarantee and 1-year warranty.

Have questions before you buy? Don’t hesitate to touch base with our cord cutting experts via Facebook, Twitter, or email.