*** UPDATE - The latest recommended device list can be found here. ***

For those of us who are less technologically inclined, cutting the cord can be intimidating. But fear not! There are a number of user-friendly technologies on the market that can help you to access a similar quality and variety of content that you've come accustomed to with cable, but at a fraction of the cost.

This is why today we’d like to give you insight into different cord cutting technologies on the market and how we’ve designed Tablo to work with them as part of a larger cord-cutting ecosystem. 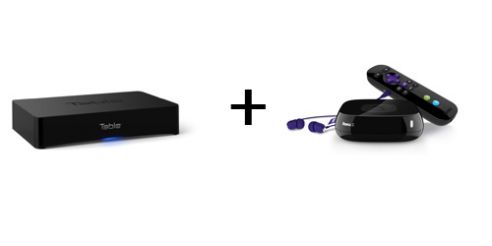 Roku offers a series of set-top boxes that provide access to Over-the-Top content provided in the form of ‘channels’. There are both paid and free channels available including services like Netflix, Hulu Plus and others.

To access the Tablo channel, Roku customers can simply go to the Video & TV section of the Roku Channel Store. Tablo's live preview of its new Roku channel is available at www.TabloTV.com/apps.

Want to see how the new Tablo looks on Roku? Check out this blog post.

The Tablo channel also allows you to navigate the menus with a more ‘traditional’ style Roku remote which may be more comfortable for those who prefer a more traditional television experience, vs. the tablet/touchscreen experience of the tablet app.

The current generation of the Roku units (Roku 1, 2, 3 & 4) have been tested for Tablo compatibility. We have also tested the older Roku 2 XD.

Roku has also introduced the Roku Streaming Stick – a dongle-format version of its set-top-box. Unfortunately in our testing we’ve found that the Wi-Fi antenna on the Streaming Stick doesn’t always offer enough power to provide seamless streaming of programming from Tablo.

Roku 3 is currently the most popular cord-cutting tool and would make a great addition to your Tablo cord-cutting ecosystem. 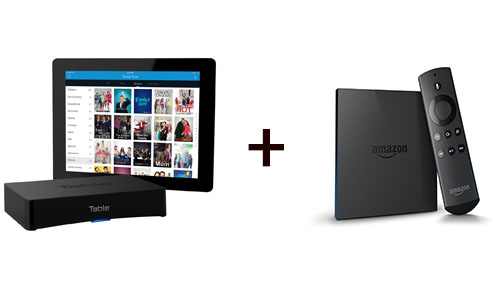 Amazon Fire TV is a new competitor to Roku in the set-top-box category. Just like Roku they offer 'apps' that allow you to access content from a range of sources including Amazon Instant Video and Netflix. It comes in both a set-top-box as well as a stick form factor and includes a remote which makes it ideal for living room viewing.

There are a few advantages to using Tablo on an Amazon Fire TV. Firstly, the app includes access to all of Tablo's screens including settings. It is also enabled for Tablo Connect, our out-of-home streaming feature which means it's a great option for those who travel or have vacation homes. Finally, being a newer product it does offer one of the fastest chipsets available in a set-top-box format.

Still some users prefer Roku as its ecosystem of available channels is more mature and wide-ranging.

To access Tablo via Amazon Fire TV you'll need to load the Tablo app on to your Amazon Fire TV. A link to the app is available here. 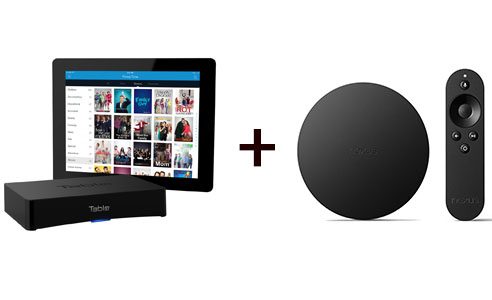 There are many other new entries to the set-top-box market running the Android operating system which are generically known as Android TV boxes. The most popular of these so far is Google's hockey-puck shaped Nexus Player but Nvidia's Shield is gaining momentum since it also offers gaming. Much like its competitors Roku and Amazon Fire TV, these units feature remotes to make viewing things on big screen TVs easy.

Just like the Tablo app for Amazon Fire TV, it provides access to all of Tablo's screens and is Tablo Connect-ready.

Its advantage over Amazon Fire TV is that many existing Android apps are compatible with the platform.

To access Tablo via Android TV set-top-boxes you'll need to load the Tablo app on your unit. A link to the app is available here.

Android TV boxes are avaialble from a variety of sources both online and in stores. 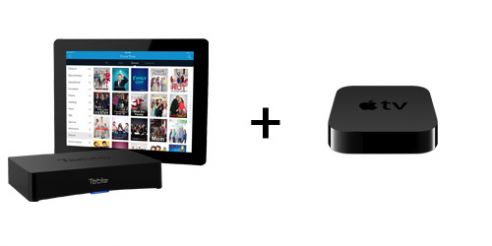 Apple TV is a digital media player, sold by (you guessed it) Apple. It is designed to play digital content from a wide variety of sources including the iTunes Store, Netflix, Hulu Plus, YouTube and Vevo. Apple TV connects to the internet via WiFi and uses an HDMI cable to connect to your television.

Apple TV works with the Tablo iPad app and uses the concept of Airplay to display content from your Tablo on your television. Once you have launched the Tablo app on your iPad and connected to your Tablo, select the program you want to watch. When it begins playing, tap the Airplay icon in the bottom right corner. This will send the signal from the Tablo, through your iPad to the Apple TV which bounces it up to your TV screen.

Watching Tablo content through Apple TV works both on your home network with your Apple TV, or even at a friend’s place using their Apple TV in combination with the Tablo Connect feature on your iPad.

Apple TV is available at apple.com and apple.ca.

At this time you are not able to watch Tablo content directly from the Apple TV (without using Airplay) as Apple has limited the number of third party developers creating ‘native’ apps for the unit. We’re hopeful this will change in the future.

(UPDATE - Tablo now has an app availalbe for the 4th Generation Apple TV.) 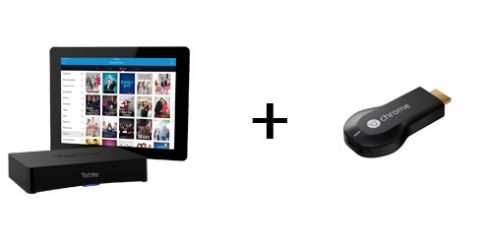 Chromecast is a thumb sized media streaming device for the Android/Google ecosystem that plugs into the HDMI port of your TV, allowing you to use your smartphone, tablet or laptop to ‘cast’ content (like Tablo programming, a movie playing on your laptop, or a YouTube video) via WiFi to your TV screen.

As with iOS, while ‘casting’ Chromecast also allows you to browse other apps while streaming video to your TV which means you can surf IMDB while watching the latest episode of New Girl.

Retailing for around $35, Chromecast is one of the most cost-effective options in a cord-cutter’s arsenal and has been growing in popularity. 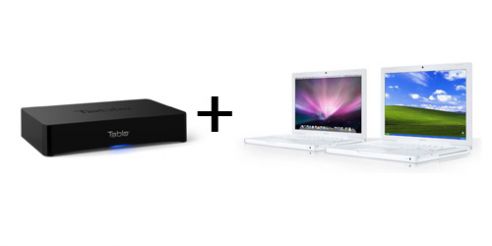 One of the best cord-cutting tools might be one that’s already in your home: your computer. Many newer laptops and desktop computers include an HDMI port that effectively allows you to turn your TV into a giant computer monitor. Some savvy cord-cutters even have a dedicated computer that sits next to the TV for the purpose of serving up media content.

With your computer, running chrome and the Tablo web app: my.tablotv.com, you can watch anything from YouTube to Netflix and even your Tablo content through our web app.

Interested in learning more about building a media PC? Check out this excellent guide. 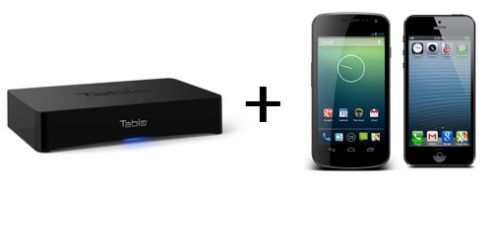 If you don’t mind a small screen experience, another option for cord cutters is using your smartphone to watch video content. People who are always on the go (for example users with long transit commutes) would likely enjoy catching the 5 o’clock news live via the Tablo smartphone app or watching the latest viral YouTube clip.

And Many, Many More with Plex

If you don't see your preferred cord cutting device on the above list, it's very possible that you could watch Tablo content on it via the Plex Media Server Tablo channel. This fan-developed third-party app enables you to watch live and recorded Tablo content on a myriad of Plex-supported devices including Amazon Fire TV, Xbox, Smart TVs, Windows phones and many, many more.

We hope this post has given you some additional details on some of the cord-cutting tools at your disposal. Ultimately, we recommend that you do some research on what options would work best for you and your family as well as what integrates with the technology you currently have. And of course, we hope that Tablo will be a part of your cord cutting solution!