Is Cord-Cutting on your list of New Year’s Resolutions? Here are 3 easy steps to keep it! 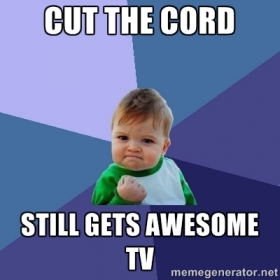 What was your New Year’s resolution? Was it quitting smoking? Going to the gym and losing 20 pounds? How’s that going for ya?

For a lot of people saving money was on top of their list…Money for retirement, for a vacation or for something else important. One of the best ways to save a lot of money quickly, is to cut back on those monthly bills that seem reasonable at first, but can add up to thousands of dollars over the course of the year.

Since cutting critical things like electricity or insurance is out of the question, you’ve got to look at other line items, like cable television. The average household is paying around $85 a month for the privilege of watching programming that mostly amounts to reruns of cheesy reality shows.

If you cut the cable cord today, by the time you’re making next year’s resolutions, you’ll have saved over $1,000. For a lot of people, the choice between a week of pools and umbrella drinks versus afternoon marathons of Duck Dynasty has been an easy one. That’s why hundreds of thousands of households each year are cutting the cord.

But don’t worry, you don’t have to go cold turkey. You can still enjoy a lot of your favourite shows including access to live local news and sports programming with these three easy steps.

Total 1-time cost of cutting the cord without going cold turkey: Less than $500.

Cutting the cord while maintaining access to your favourite programs is easier than ever and it’s guaranteed to be a less painful resolution than hitting the gym.

Who knows, it cord-cutting might be the first resolution that you actually keep!